Entertaining spaces at the forefront of home design 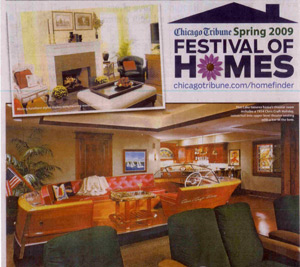 Maybe its the current economic situation, but more people are choosing to entertain at home these days. Whether its a great room that combines gaming areas with a wet bar or a home theater room, home entertainment spaces are increasing in popularity.

With the onset of an economic recession, more and more individuals are deciding to entertain in their home, says Chicago-based designer Leslie Markman-Stern, a member of the American Society of Interior Designers. Instead of selling their homes on which they may not make a profit, they are electing to renovate and transform their spaces to meet their entertainment and social needs.

Every client is different, emphasizes Highland Park-based designer Paula Winter, ASID member. Each client has their own wish list. It depends on whether they work away from the home, whether there is family in the area that they need to accommodate or what the age spans are of the people using the space. Overall, function is paramount.

In some cases, this may mean turning an empty bedroom into a media room or combining activities to make a great room cross generational, Winter says.

Personalized Spaces
In almost all cases, people want their flat-screen TV to share a prominent space, Winter says. The TV is the driving force, she says. We used to be able to hide it in a cabinet, but now they want it to be a focal point.

This new great room concept may also include an informal seating area, a game table and kitchen amenities. However, she also needs to incorporate techie considerations such as the TV and surround sound. My clients want to be able to use the space for a group of 12, but still have an area to carry on a quiet conversation, Winter says. The room also has to serve different generations of the family.

The great-room concept is a growing trend, agrees Markman-Stern. My clients are electing to build great rooms that encompass not just home theatres, but adult entertainment areas that are equipped with versatile game tables, we bars, flat screens, informal seating areas and mini kitchens, she says. These areas are relaxed and seem to suggest a desire to spend a lot of time at home.

These rooms can also incorporate special themes representing the individuals special interest. For a clients home in Lake Geneva, Wis., Adele Lampert with Page One Interiors Inc., Barrington, created a yachtsmans bar and theater room in the walk-out basement. A 1954 Chris Craft Holiday was converted into upper level theatre seating with additional seating at the bow for bar stools.

The bar displays the owners sailing trophies and nautical art, she adds. A half-round, stained glass window was incorporated into the back wall Cabinetry and disco ball accent light was installed over a dance floor area.

Comfort, multifunction unite
Leather is still the fabric of choice due to its durability, says Lampert. It allows for easy cleanup and is resistant to scratches caused by the family pet jumping on it. People are also opting for easy-to-clean commercial fabrics.

Comfortable fabrics and materials were key when designing a great room for a client, says Lake Bluff-based designer Joanne Tinsley, an ASID member. The client wanted to use the room to entertain friends, family and grandchildren. They wanted everyone to feel at home and comfortable.

Its furniture features an eclectic mixture of styles, colors and textures. You can snuggle on the red chenille sofa while watching a golf tournament or curl up in the black leather chair to read a novel, she says.

Much of its furniture is multifunctional, she adds. The large ottoman features a wooden tray which can be used to serve snacks or it can be removed if more seating is need. Beneath the TV, the pine cabinet serves as a bar.

With the great room being used for movie watching, many families also want room-darkening blinds, Markman-Stern says. While the blinds may be a traditional concept, there are many new finishes and textures that give the room a modern appearance, she adds.

The return of the dining room
In addition to the great room, people are opting for formal dinning rooms once again. These may feature large tables that sit up to 12, made of mahogany, Winter says. These rooms are being used for formal dining usually after work. Clients want rich finishes, she adds.

They may also have special request. She recently constructed a taller dining table for a client who was over six-feel tall. People may want a formal dining room, but they are not necessarily cooking more, says Chicago-based designer Brain Olson of Olson Leavy Design Inc., an ASID member. Instead they are usually picking up a dinner and serving it to their guests --a quick fix to entertaining friends after work, Olson says. But they are using their formal chine and stemware instead of leaving it locked away in the cabinet, he adds.

Not only do they want to sit at the formal dining room, but they also want an area to set up a buffet for larger, more informal gatherings, Markman-Stern says. These ideas all need to be incorporated into the space.

Transforming empty rooms
In smaller spaces, a couple may opt to turn an empty bedroom into a multimedia room featuring flat-screens TVs, surround sound and theatre-style seating. They may also complete the rooms with a sleek, modern bar, Markman-Stern says. These arent like the heavy dark-paneled bars of the 1960s, but more modern, she adds.

This bedroom transformation is particularly popular with empty-nesters. Many of these people are Baby Boomers who have empty rooms now that the children have left home, but have the real estate to turn these vacant spaces into a playland for themselves and their guests, Markman-Stern says.

For a client who is a film buff, Olson says he wanted a functioning screening/entertainment room but in a small bedroom in his Chicago condominium. A historic condominium that had not been renovated since the 1960s was gutted and transformed into a glamorous 1930s Hollywood-inspired 2,300-square-foot residence. It highlighted the traditional while bringing in sate-of-the-art modern conveniences, which can be seen in the small, but fully functional home cinema/screen room, Olson says.

Whatever the outcome, the desire is the same, Tinsley says. Whether youre with friends who come over to watch a football game, or youre enjoying time alone in front of the fire, the idea is to enjoy your home, she adds.