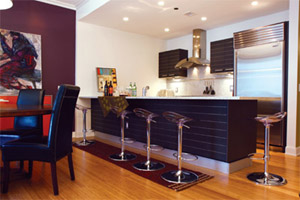 A second home is like a personality makeover, a space where you can express a completely different side of yourself. We go inside one north shore family’s Chicago pied-a-terre, a sleek, contemporary condominium that allows them to go from suburban life to urban chic all in one 30-minute drive.

It is human nature for one to want what one cannot have, or at the very least, crave something completely different from the status quo. This urge often manifests itself at cocktail parties in the answers to such questions as "If you weren't a writer (doctor, lawyer, accountant), what would you be?" Few of us have the opportunity to reinvent ourselves, but those lucky enough to have a second home do get the chance to reinvent their living spaces, and depending on the location, their lifestyles. 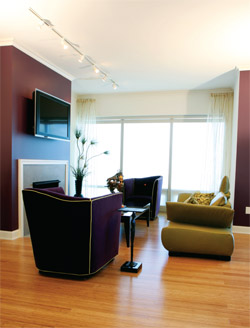 One such North Shore couple did exactly that when they decided to put in a pre-construction bid on a 2,200-square-foot condo on Chicago's Magnificent Mile a few years ago. To them, it was an opportunity to test drive big-city living without leaving their Winnetka comfort zone, a way to take advantage of Millennium Park and all the new downtown attractions without the hassle of hotel reservations. And with the help of Highland Park interior designer Paula Winter, the couple was also able to take some decorating risks and try out a style very different from the one they had been living with the last 25 years.

"I think when people leave their primary environment, they are ready for that break," explains Winter, who met with the couple when they purchased the three-bedroom, three-bath condo and began planning a design that was a clear departure from the more traditional Winnetka home they had as a primary residence. "I think when they remove themselves from that day to day and the new space gives them a boost of energy, it puts them in a different place."

When the couple originally met with Winter they envisioned something very contemporary. But as the design process continued, they refined the plans to suit their own personal proclivities — his being more modern, hers being an attraction to sculptural lines and color.

"Because we have such a traditional home in Winnetka, what we really wanted was to go in the opposite direction," says the husband. "We wanted something bright and exciting and bold, something different from what we live with every day in our life here."

They certainly got what they were looking for.

From postcard 47th-floor views of Navy Pier and Lake Michigan to a warm, yet still contemporary, color palette of eggplants and purples, the couple and their four children find themselves fleeing to the city even more than they once expected.

"It's really just the polar opposite of what we have here," he says. "Even though we've only had it just nine short months, I can just see that it's going to be a much more exciting way to live. It's just so new and different and seems to be opening up a whole new chapter in our lives."

Two of the couple's four children are in college, so they're not quite empty nesters yet. However, the kids are old enough to enjoy city attractions with Mom and Dad, whether it's a night at Lyric Opera or a Cubs game.

"I knew just from our original meeting that what they were looking for was a change in this next additional environment," explains Winter. "They wanted someplace where all six of them could go spend a holiday weekend, be able to go to theater, be able to go on a bike ride without lugging their bikes ... they have them right there."

Even though Winter says the family is using the downtown condo much more often than she had originally anticipated, the interior finishes and furnishings were designed with a secondary residence in mind. They needed to be functional and low-maintenance, but they also needed to make a statement.

"Because the condo is only a 30-minute drive from our home here, we can use it any time, any day of the week," says the husband.

"There are times when all six of us are down there. When my wife takes the girls to the ballet, we use it for that, and when the boys are home from college, they like to use it as far as going down there with their friends. The place up north on the lake is fantastic, but it's a six-and-a-half-hour drive to get there. The condo can be a spur-of-the-moment weekend or evening."

Someday, when all the kids are grown and out of the house in Winnetka, the couple expects they will make their primary residence in downtown Chicago.

But until then, as they enjoy the final years of having a full house, this modern pied-a-terre is the perfect way to preview — and reinvent — life's next chapter.