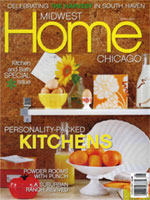 For much if its existence, the powder room was viewed as a nice utilitarian space. No frills, simple, and neutral. Save for a few splashes of color, some handmade soap, and perhaps a piece or two of art on the walls, the small space remained much as the builder left it.

Enter the age of expression. Today, homeowners view this lovely little spot as an unexpected sanctuary where they can let their creativity shine through various wall textures, luxurious materials, exotic art, and bold colors. Even the green movement is making its way into this increasingly posh area.

Changing lifestyles also factor into the evolution of the powder room. Once their children have left the next, homeowners often invite more friends and business associates into their homes. They want wow for the powder room, says Paula Winter, owner of Paula Winter Design, Ltd. in Highland Park. We wanted to make her powder room formal but transitional, to give it a sense of connection to the other rooms, Winter says. 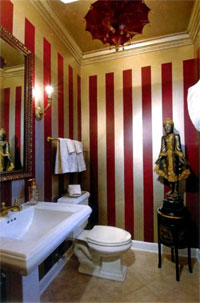 Accordingly, the designer left the porcelain tile flooring. However, to get a more formal English feel, they painted the space in wide red and gold stripes, and recast the ceiling in tone-on-tone gold polka dots. Two sconces were imported from Englad. Over time they will oxidize, giving them more English character, Winter says.

The most eye-catching piece is the red-scalloped chandelier by John Rosselli. I found it to be very lyrical, she says. The scallops help carry through the stripes on the wallpaper. It accents the movement of the design. To further personalize the space for Menaker, who is 5-foot, 3-inces tall, she visually dropped the 9-foot ceiling by painting it, the molding, and the top 10 inches of the wall the same gold tone-creating the illusion than it actually does.

It makes for a smaller, cozier space, Menaker says. Paula also positioned the mirror low enough so that I could easily see it. They also designed it so that there is enough light between the chandelier and the two scones to adequately see; yet the sconces and the chandelier are on separate switches, so I can dim one or the other for a softer light for my guests. These items were a little more expensive, but they really make the room. I said, Lets go for it. I love it.

Thats the fun of these small showcase spaces. Theres a visceral response to a powder room, Winter says, and if thats what weve captured, its a huge part of what people want.